Faisal Maina, the son of embattled former chairman of the Pension Reforms Task Team, Abdulrasheed Maina has appeared in court.

Faisal Maina in court yesterday
A Federal High Court, Abuja, on Friday, 25th October 2019 ordered the remand of the embattled former chairman of the Pension Reforms Task Team, Abdulrasheed Maina, in prison custody.
Maina appeared in court alongside his 20-year-old son, Faisal said to have pulled a gun at security operatives as they tried to arrest his father some weeks ago.
Justice Okon Abang granted the remand order following a request by the Economic and Financial Crimes Commission after he pleaded not guilty to the 12 counts.

The judge consequently adjourned untill October 30 for trial and November 19 for suitability of his application for bail filed before arraignment.
Maina is facing charges of money laundering, operating fictitious bank accounts and fraud. 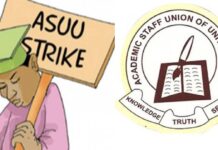 Why We Extended Strike By Twelve Weeks – ASUU

“Right Now, Buhari Is More Of A Threat To Nigeria Than Boko Haram”- Reno Omokri reacts to Buhari Birthday Celebration