In 2014, Destiny Etiko was nominated for Best Actress in a Supporting Role at the City People Entertainment Awards. 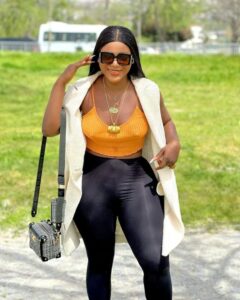 Nollywood star, Destiny Etiko, is one of the most successful actresses known for her dramatic, humorous, and romantic roles. She is undoubtedly one of the most beautiful, talented, hard working and prolific actresses in Nigeria today.

Here are 14 fascinating facts about Destiny Etiko that you probably didn’t know.

1.  Destiny Etiko is a popular and well endowed Nollywood actress, scriptwriter, television personality, producer and a model. She has been regarded as one of the best talented actresses in Nigeria and also one of the most gorgeous and favourite celebrities in Nigeria. She hails from Udi, a small town in Enugu State in the south eastern part of Nigeria. She is gifted and creative in her profession, ‘acting’ and interpretation of movie roles. She can fit in any character given to her to play by movie producers and directors.

2.  Destiny Etiko is one of the most sought after actresses in Nigeria today. She is an excellent example of a lady who has achieved her dream thanks to patience and hard work. She was born on August 12, 1989. As for her siblings, the actress has three brothers and a sister. Her father was John Anonde Etiko who passed away on 15 May 2020. He was laid to rest on 22 May 2020. According to her, things were not rosy for her family while growing up. The actress and her family lived in a building with a leaking roof and would always pray that rain should not fall

3.   Her mother was an actress. The actress once mentioned that her mother sacrificed her career to dedicate her life to the family. After Destiny became famous and wealthy, she decided to surprise her mother with a grand gift. In 2019, the media published news about Destiny Etiko house. The actress bought it as a present for her mother. She gifted it to her on her birthday to show respect and love for all the care and love she got from her and a year after, she bought a Toyota spider for her mom. In contrast to her mother, who gave up her dream in favour of her family, she dreamt of meeting a man who would share her interest in acting.

4.  Destiny Etiko rounded up both her primary and secondary school education in the big city of Enugu State in the southern eastern part of Nigeria and gained both her First School Leaving Certificate and West African Senior School Certificate. While still in secondary school she was actively engaged in school drama, stage play and performing arts. The young beauty dreamt of becoming an actress, like her mother. In 2011, she registered with the Actors Guild of Nigeria and became part of the Nigerian film industry, also known as Nollywood. In 2012, she successfully graduated from the university with a Bachelor’s Degree in Theatre Arts from Nnamdi Azikiwe University in Awka, Anambra State. After completing her tertiary education, Destiny Etiko was enrolled into the mandatory National Youth Service Corps (NYSC) in 2014 and completed her National Youth Service Corps (NYSC) in 2015.

5.  After registering with the Actors Guild of Nigeria as a professional actress, Destiny Etiko started attending movie auditions and was appointed to cast in several movies. She started out with a minor character before levelling up to a lead character till she became a mega super star. Destiny is a confident and bold woman known for being outspoken about personal issues. She has been described as one of the most beautiful and gorgeous actresses in Nigeria. She described her experience as a difficult one because she had to combine her acting career with her schooling as she was still a student at the time. Etiko in an interview affirmed that she had been a victim of sexual harassment against women by male movie producers who are by far the majority as pertains movie productions in Nigeria.

6. Like any rising star, Destiny Etiko rose to stardom in 2012, after starring the role of Ekemma in the Nollywood blockbuster movie “Idemili” an epic tragedy true life story movie which was directed by Ernest Obi and starred with Nollywood stars like Pete Edochie, Patience Ozokwor, Uche Odoputa, Cynthia Okereke, Ernest Obi, Yul Edochie and Eve Esin. Her role in the movie brought her to limelight and made her a public figure. The movie won her an award for Most Promising Actress in Nigeria at the Africa Magic Viewers Choice Awards. The movie was directed by multiple awards winning movie director Ernest Obi and produced by Onye-Eze Productions. The location of the movie was Asaba and Enugu state, respectively.

8. Destiny Etiko is a force to reckon with in the Nigerian movie industry popularly known as Nollywood. She has carved a niche for herself in the entertainment industry and has also attracted herself to popular movie producers and directors in Nigeria, who cast her in their movies consistently as a lead character. Destiny Etiko acts in both English and Igbo speaking movies and knows how to interpret her roles very well. Destiny Etiko has shared screens with prominent Nollywood actors and actresses such as Ernest Obi, Cynthia Okereke, legendary Pete Edochie, Patience Ozokwor, Nkem Owoh, Chinwetalu Agu, Ngozi Ezeonu, John Okafor, Mercy Johnson, Ken Erics, Genevieve Nnaji, Yul Edochie, Zubby Michael, Tonto Dikeh, Eve Essien and a host of other popular Nollywood celebrities.

9. Destiny Etiko is very gifted in acting and interpretation of movie roles. She has been regarded as one of Nollywood most fastest rising actresses and one of the richest Nollywood actresses in Nigeria. Destiny Etiko in the course of her acting career has won a lot of awards and recognitions. Some of the awards she has won include Most Promising Actress in Nigeria at the City People Entertainment Awards, Best New Actress at the Africa Magic Viewers Choice Awards, Best Actress in a Supporting Role at the Golden Icon Movie Academy Awards, Best Actress in Nigeria at the best of Nollywood Awards.

10. Destiny Etiko relationship status currently is single, and has never been married before. She kept her relationship and personal life hidden and away from public eyes and social media attention, that is why nobody knows who her real boyfriend actually is. Some people believe she is in a romantic relationship with Nollywood actor Zubby Michael, but that assumption cannot be verified because both Destiny Etiko and Zubby Michael have not made any public announcement of any of them being in any relationship. However, Zubby Michael is always spotted with Destiny Etiko in clubs, events and social gatherings and both parties, they also always share passionate kisses outside the camera which makes people start thinking that the two Nollywood stars are indeed in a romantic relationship.

11. When it comes to luxury, Etiko has invested some of her wealth into an expensive houses in the city of Enugu where she resides. It will be recalled that on August 13, 2021, Destiny Etiko took to her Instagram page on her 32nd birthday to show her newly acquired mansion located in Enugu State. She wrote, “a birthday gift from me to me”. Barely a month later, she also took to her Instagram page to share photos of her second completed mansion on September 1, 2021. Three months later, on December 12, 2021, she also took to her Instagram page to announce the completion of her third mansion. Her car collections are top-notch, cars like 4matic Benz worth over N25 million, Toyota Venza worth over N12 million, 2021 customized Land Cruiser Prado Jeep worth N37 million and a Lexus Jeep worth over N10 million fills up spaces in her compound.

12. Destiny Etiko currently has an approximate net worth of over $750,000, according to creebhills.com, making her one of the richest and most influential actresses in Nigeria. She is also very popular on social media with more than 4.1 million followers on her official Instagram account and Facebook page. Destiny Etiko aside from acting is also a social media influencer, a YouTuber, a movie producer, brand ambassador, modeling of clothes and pieces of jewelry. She also receives endorsements from different brands and she is working with construction companies.

13. Without mincing words, Destiny Etiko remains one of the most generous and selfless actresses in the Nigerian movie industry. Her goodwill towards the less privileged has earned her so much love and affection from the masses. Currently, the actress set up a non-profit organization in her name which is aimed basically at alleviating the miserable condition of people languishing in penury and destitution. Destiny Etiko Foundation (DEF) on countless occasions have reached out to people in various localities in order to lend a helping hand in any little way.

14. Destiny Etiko alongside her crew members have visited schools, widows and poverty-stricken individuals in the interior parts of Nigeria and subsequently blessed them with items such as bags of rice, garri and so on. There is no doubt that benevolent gestures like such bring about much love from people and blessings from God; little wonder they say ‘one good turn deserves another’. Hence it is in her nature to show excessive love to the helpless, they reciprocate in the little way they can by continuously blowing her trumpet.

Destiny Etiko is indeed a character to watch out for in the Nigerian movie industry popularly known as Nollywood.