This article is about the top actors who ruled the Nigerian movie industry in the 90-s and 2000-s and help build Nollywood to what it is today. But despite no longer being in the spotlight they are still does actors who make you wonder, what happen to them, and why are they no longer appearing in any Nigerian movies? Don’t worry we got you covered, and today we are going to get you updated with answers to this questions.

Saint Obi also called Mr. quality because of his attention to details when acting.

Saint Obi came into the spotlight in 1995 after taking movie roles here and there. Saint Obi became more famous after featuring in the hit movie” take me to mama”.

Why he stopped acting: In an interview Saint Obi disclosed that he quite acting to focus on movie productions and other businesses.

Charles is one great actor who can fit into every role giving to him. He came into the spotlight in 1996 after starring in the movie ”end of the weekend”.

Pat came into the spotlight after featuring in many love movies that will melt your heart.

Why he stopped acting: it was rumored in 2011 that Pat Attah became a born again Christian, and also relocated to Germany. But on July 2018 he released a single titled ”Sunshine” on YouTube.

This is one actor worth watching on screen, his acting skills is top notch. He made it into the spotlight in 1995 after starring in the movie ”Goodbye Tomorrow”.

Why he stopped acting: Chidi is currently married and blessed with beautiful kids. The actor stopped acting to focus more on his clothing line and studio.

He came into the spotlight after starring in the movie ”living in bondage”. Bob has also starred in a lot of Nigerian hit movies, so his face is kind of familiar to every Nigerian movie lover.

Why he stopped acting: it was rumored that he was into politics and also an entrepreneur.

The original Nollywood bad boy! After living in the US for a long while Hanks joined the Nigerian movie industry in 1999 and featured in several hit movies.

Why he stopped acting: Hanks quite acting when he located to Ghana with his family and now a citizen of Ghana.

There is no doubt about Sam being one of the pioneers of Nollywood. He came into the movie industry in 1994 and featured in several hit movies.

Why he stopped acting: Sam is currently Married with Kids, where he combines both his lecturing job and other businesses to support his family.

Tony launched his professional acting career in the year 1993, and became famous after starring in the Nigerian blockbuster movie ”Died retched” in 1994.

Why he stopped acting: Tony is still into acting but not as before, he decided to focus on his family, and other businesses.

Emeka featured in popular TV series and movies which made him famous, and one of the highest paid actors in the early 2000-s.

Why he stopped acting: He left the Nigerian movie industry and focused more on his construction company as the executive director. 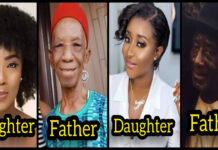