After reading this story, you will know more about Chisom Oguike Hilary, Chidinma Oguike Stephanie, and Chinenye Oguike Joy. There is a lot more to the sisters than meets the eye. If you are a true fan, you need to follow them and show your support in every way you can.

When it comes to Nollywood, three sisters are taking the industry by storm. They include Chisom Oguike, Chidinma Oguike, and Chinenye Oguike. They have managed to amass loving fans after being featured in “My Kids and I.” The movie went on to become a huge success, and the Oguike sisters even went on to star in the film “Home Alone.” However, if you are interested in the Oguike sisters, you have come to the right place. This article discusses the biography, ages, net worths, cars, houses, and other information you may not know about them.

Despite their fantastic acting, Chisom Oguike, Chidinma Oguike, and Chinenye Oguike are still young. They are child actresses who have a bright future ahead of them, and everyone wants to follow them on their journey. Everything started back in 2017 when the sisters appeared in the Soul Mate Studio film that rocked Nigeria. Today, the Nollywood actresses have a huge fan base and continue to be loved by many. You might have seen pictures of the Oguike sisters with Mary Chukwu and many other celebs. They even have a younger brother, Zion Oguike, possibly the cutest thing in the world.

If you are one of the fans who want to find out who the parents of the Oguike sisters are, you will be amazed to know that their mother looks like an Indian. She is gorgeous and has a fair complexion. She celebrated her wedding anniversary with her husband on April 29th. Judging by pictures of the Oguike sisters’ parents, you would instantly recognize that Chisom Oguike looks just like her father, whereas, Chinenye and Chidinma Oguike look like their mother.

Having worked with Nigerian actor Bolanle Ninalowo, the Oguike sisters got a huge opportunity to grow their careers. When they walk the streets of Abuja, they are instantly recognized by just about everyone. Boasting thousands of followers on Instagram and other social media platforms, they use each platform to connect with fans. Stardom has completely changed their lives. However, the sisters have not changed. They are just as friendly and love meeting fans. There is much more potential for their careers, and the sisters show no signs of stopping. They are passionate about what they do and never back out from a challenge. Nothing means more to them than acting. It is only a matter of time before they are just as famous as any other Nollywood actress.

Since the Oguike sisters started their Nollywood journey at a young age, they are likely to make it big. Every opportunity that has come their way has only allowed them to shine. Hence, there is nothing that the sisters are not willing to do for stardom. They are super talented, and they possess great personalities that shine on-screen. 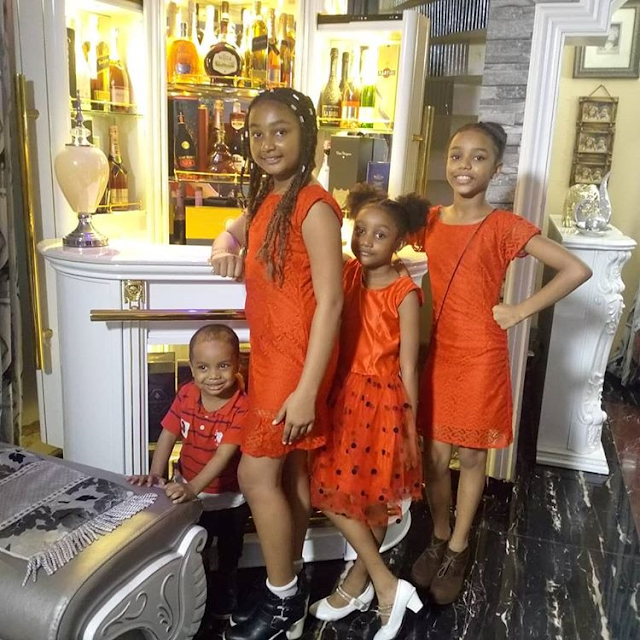 Chidinma Oguike Stephanie was born on August 17th 2009. Her role in the popular series “My Kids and I” catapulted her to stardom. Then, she later appeared in the soulmate studio series with her sister. Soul Mate Studio manages the career of the child actor, and she was the lead child actress in “Home Teacher”.

On the heels of her success, Soul Mate Studio signed up the child star for more movies. Chidinma Oguike was nominated for the 2018 City People Movie Award for the best new actress (English) category. She is the second daughter and is the tallest of the three. Despite her young age, Chidinma still looks more mature for her age. She is rather plump in comparison to Chisom and Chinenye Oguike.

Chisom, Chidinma, and Chinenye Oguike are excellent actresses. Their acting is next level. Anyone who has watched them on television would agree that Nigeria offers the best child actresses. There is just something about these sisters that makes them so relatable. They play characters that resonate with everyone else. Due to this reason, every scene they act in is received with a round of applause. The trio does not show any sign of inexperience.

If there is one thing that everyone in Nigeria will agree with, it is the fact that the Oguike’s are possibly the most adorable sisters out there. They are beautiful and highly presentable. Every event they have attended has only helped take their career to new heights. If you have watched their interviews, you will understand just how cute the sisters are and how much fun they seem to be. You will find the sisters fun as they do not take themselves very seriously and always crack a joke or two.

“My Kids and I” is possibly the best African movie out there. Anyone searching for the best African film to watch will find it the right option. The movie manages to master just about every single detail. It does not miss out on anything. There is a lot that we can learn from the film. As a matter of fact, the plot, the humour, and the acting by the sisters helped the movie succeed. If you have not watched the movie, it is time that you did because it will cheer you up. And by the way, the Oguike sisters do not have boyfriends yet.