The Zazuu star offered prayers for the babies before handing cash to their mum and some other women. 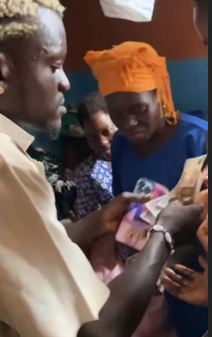 Nigerian singer, Habeeb Okikiola popularly known as Portable in a video shared online has been seen helping the less-priviledged in the society.

The Zazuu star recently paid a visit to a young woman who had just given birth to twins and decided to gift her a reasonable amount of money.

Recall that Portable had earlier told his fans that he would not be giving them money on the streets anymore, rather he would be supporting widows, elderly women and orphans.

In fulfilment of his promise, he could be seen visiting a new mum in her home after she had been discharged from hospital.

He offered prayers for the babies before handing cash to their mum and some other women.

This is what God will wants as I visits those who really needs me , this is a video of newly born twins . Am so happy to keep giving cus its really Commandments.”