In what will come across as a really shocking development, a woman has swallowed her engagement ring while sleeping. 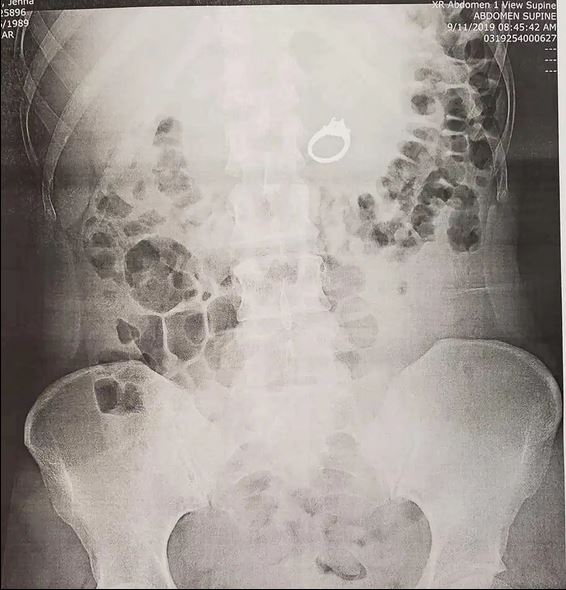 An X-ray showed she had swallowed her own engagement ring

A horrified bride-to-be has revealed she accidentally SWALLOWED her own engagement ring while she was sleeping.

Jenna Evans, 29, was horrified when she woke to find her ring missing, following a terrifying nightmare where she was led to believe she needed to eat her ring to protect it.

Sharing shocking X-ray images on Facebook, Jenna, from California, revealed: “I was having a dream that I was in a very sketchy situation involving a high speed train and bad guys (I have very exciting and vivid dreams) and he told me I had to swallow my ring to protect it.

“So I popped that sucker off, put it in my mouth and swallowed it with a glass of water right about the time I realised what I was doing.”

Explaining that she assumed she had dreamt swallowing the cushion diamond sparkler, Jenna went back to sleep.

But when she woke the next day, she was horrified to realise the ring was missing and woke up her fiance Bob to break the bad news that she had in fact eaten the ring. 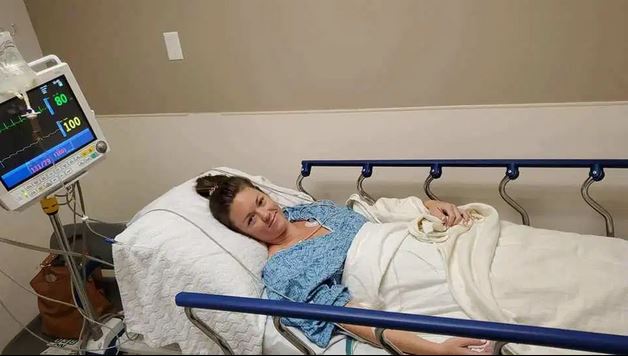 The bride-to-be took to Facebook to share the story
“I don’t think he believed me right away,” she admitted.

“We laughed pretty hard for about an hour and a half, called my mum, laughed until we were crying, googled ‘do other adults swallow rings’ because kids do it all the time, but apparently it’s less common for adults.“I went to urgent care where I struggled to explain why I was there, because I was laughing/crying so hard.

“The doctor ordered an X-ray and seemed pretty shocked when she walked back in with a second doctor and showed me that sure enough, my ring was right there in my stomach!” 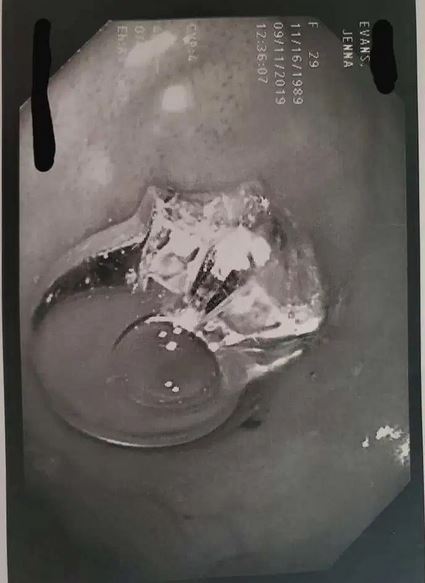 Shocking images showed the huge diamond ring in her stomach
Jenna explained the gastroenterologist advised against letting nature take its course and Jenna was sent for an upper endoscopy.

“They decided it would be best NOT to let nature take its course,” she continued.“Before I left, she recommended seeing a sleep specialist as well.

“Bobby took me to the GI doctor where I got to tell a whole new group of doctors and nurses that yes, I swallowed my engagement ring.

“At this point, I could definitely feel it in my guts, it was starting to really hurt and make us nervous.

“They found my ring just beyond my stomach in my intestines, retrieved it and gave it to Bobby.

“Apparently I don’t do great with anaesthesia because I came out of it hysterically crying and was totally inconsolable.

“Bobby finally gave my ring back this morning – I promised not to swallow it again, we’re still getting married and all is right in the world.

“Ring is lovingly made by Simone Jewelry Designs in Houston, Tx. Jewels so lovely, you could eat them. But don’t – trust me on this.”

I Am Her Father, I See Nothing Wrong Sleeping With My Daughter’ –Arrested Akwa Ibom Father says

Final Year Student Butchered By Cultists in Crutech Recovers. See What He Looks like Now (Photos)

Story Of Mad Couple Married For 22 Years With 3 Children