Cristiano Ronaldo is one of the most temperamental footballers in the world. The Manchester United forward has shown his temper several times while on the pitch. In this article, we are going to look at Eight times Cristiano Ronaldo has lost his temper.

El Clasico is one of the biggest rivalries in the football world. There is always a lot of tension from the players, managers and the fans at the fixture. The rivalry was even much exciting when Cristiano Ronaldo was at Real Madrid and Lionel Messi was at FC Barcelona. The two stars excited so many fans during those days.

Well, Cristiano once allowed his temper to take the better part of him at an El Clasico fixture. The Portuguese star pushed Pep Guardiola after he threw the ball away from him. The ball had gone out of play and Cristiano was in a hurry to take the throwing.

Guardiola who had the ball threw it away from Cristiano Ronaldo so as to waste a few precious seconds. Cristiano Ronaldo did not appreciate Pep Guardiola’s actions and he clearly showed it by pushing him. FC Barcelona players got furious after seeing what Cristiano did.

They confronted the Real Madrid star and things got messier as his teammates came to his rescue. The referees had to intervene so as to calm the players down.

Well, it is not easy to score a goal in a football match. The amount of passes and moves made in order to score a goal requires time. Luis Nani once scored a goal for Portugal which was ruled offside by the linesman. However, the goal would have stand if Nani had not interfered with the ball.

The ball was heading towards the net when Luis Nani shoved it into the net. The linesman ruled the goal offside and Cristiano Ronaldo was very furious with Luis Nani. He showed his anger as he walked away from Nani. Ronaldo even threw his armband on the floor to show how furious he was.

Well, Cristiano Ronaldo was known to get furious when his teammate couldn’t score from his pass or when his team conceded a goal they could have prevented. The Portuguese star once lost his temper after Real Madrid conceded against FC Barcelona in the final minute of El Clasico.

Cristiano Ronaldo was very furious after the last minute goal. Agony was clearly on his face after FC Barcelona scored through Lionel Messi. What annoyed Cristiano was the fact that nobody fouled Sergi Roberto as he was running towards Real Madrid’s goal. Roberto easily gave a pass to Lionel Messi who eventually scored the winning goal.

Ronaldo was seen blaming his teammates as he threw his hands in the air. He had lost his temper because of the goal he never wanted his team to concede.

Well, the incident between Cristiano Ronaldo and Curtis Jones sparked reactions from many football fans. Liverpool star Curtis Jones successfully shielded a ball from Cristiano near the end line and went down after the ball had gone out. 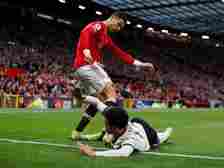 The referee blew his whistle signaling a foul against Cristiano Ronaldo. The Manchester United star went in for a violent kick on Curtis Jones. Ronaldo made contact with the ball but the impact was directly felt by poor Jones. Ronaldo received a yellow card for his action.

After coming on as a substitute in the Spanish Super Cup second leg, Ronaldo scored a phenomenal goal to give his team the lead and was booked for removing his shirt. Minutes later, the referee gave him a second yellow for allegedly diving inside the box.

Amidst the chaos, Ronaldo pushed the referee and was given a five-match suspension for his actions.

During the 2005-06 Champions League, Man United faced Benfica away from home and Scholes scored early in the game. However, Benfica bounced back as the Portuguese side scored twice before half time.

The crowd kept jeering Ronaldo and after being substituted in the 67th minute, he made a single finger gesture towards Benfica fans and earned a one-match suspension from UEFA for his actions.

Despite ending the 2006-07 season on a high with 17 league goals, Ronaldo received a three-match ban for his actions against Portsmouth in the following campaign.

Ronaldo was repeatedly targeted by Portsmouth players, but the referee did not find a valid reason to take action. Ronaldo was infuriated by the way the opposition was treating him and headbutted Richard Hughes.

A 2-0 defeat away from home against Atletico made Ronaldo angry as the crowd kept booing him. Before the second leg, Simeone promised he will sell watermelons in the streets of Madrid if Atletico do not qualify.

One of the greatest Champions League comebacks followed and Ronaldo was at the centre of it with a memorable hat-trick. After scoring the third goal, Ronaldo went to the away stand and made a “s**k it” gesture. It was in reply to Simeone’s gesture in the first leg.

1.Throwing the mic on a pond

The incident happened during the Euros tournament. Cristiano Ronaldo was the center of attention in 2016 when he threw the mic of a reporter in a nearby pond.

Cristiano Ronaldo’s actions left football fans criticizing him. However, it was later discovered that the former Real Madrid star had his own reason for snatching the mic and throwing it away.

According to reports, the CMTV reporter whose mic was thrown away had made a lot of reports concerning the athlete. The reports made by the journalist were personal and Cristiano Ronaldo was not happy with him. Cristiano Ronaldo might be a global star but he made it clear that he does not like reports about his personal life shared.