Sunday Omobolanle, often known as Papiluwe, is a Nigerian Nollywood actor. This comedic actor and playwright is one of the few Nollywood celebrities who has made a name for himself. Peju Ogunmola, a veteran Nollywood actress who is making waves in the industry, is his gorgeous wife. 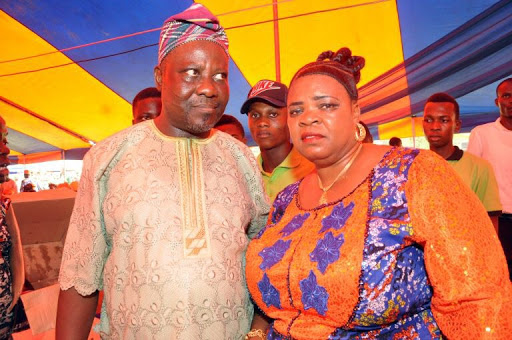 You are one of the blessed actors in the industry, you have a wife and a son who are making waves’s how does this makes you feel?

That is a long story. I actually don’t know how to start but. It is God who made it that Peju Ogunmola my wife is the daughter of our father in the industry, Chief Ogunmola. For our son, Olasunkanmi, If you ask him, he will tell you never wanted him to act but to God be the glory, he has carved a niche for himself.

Let talk about your wife, Peju Ogunmola, what is the Love story like?

If I start, we won’t leave here but I will try to be as short as

possible. Like I said, Peju Ogunmola’s father was like a father to many of us. When we travel all over the federation for stage play and we are coming back to Lagos, we always branch to Pa. Ogunmola’s house. Then Peju was so young and very pretty. So I always joke with her that I will marry her.

She will say I am not your wife and I will not marry you. And that was how we later ended up together and we have been together for over 3 decades and still counting. So, I met Peju in her father’s house.

How was it like getting you to agree to Olasunkanmi to act?

Sunkanmi is another man entirely and this is because Sukanmi started acting at age 9 even before he went to Military School Zaria. I must confess to you, I didn’t support him initially. This is because I wanted him to do something else. Then acting wasn’t even as lucrative as this. Things were difficult in the industry then, but I thank God that he followed his passion.

Why is it that we hardly see you in movies these days?

People may think I am very selective but I have a name to protect. I look at script and read well any script before accepting it. I don’t care about how much the producer is ready to pay me. I protect my name and I don’t joke with my intergrity. I don’t want to act any role that will tarnish my image.

How did you get your stage name Aluwe?

Another long story. My stage name “Aluwe” was given to me by my late boss, “Baba Mero” But I was very social and will always attend KSA shows. So whenever he sees me at any of his show, he will start to sing “Ode Bo Se De, Papiluwe”. So it was KSA that added Papi” to the “Aluwe”

and that was how it be became. I always go to Ariya hotel to watch KSA then. So that is the story behind my name “Papiluwe”.